September 11, 2019
The electrical system on the boat was in a very sad condition and needed a refit. As it's often the case on older boats, the previous owners just added new stuff without really improving the system or thinking it through. Worst of all, they didn't use marine grade materials or did the installation right either. They just applied quick fixes and left it that way.

We were planning to rewire the boat completely during this fall, but as it turned out, it couldn't wait. When I started the engine before heading out for a one week sail, the battery warning light came up. According to the manual the light might indicate incorrect voltage from the generator. When I checked it with a multi-meter, it was very high indeed, well over 15V, so it was overcharging the batteries, which carries the risk of gas leakage or explosion. So we decided to investigate it further and delay our departure for vacation. After disconnecting the house bank, the alternator output normalized, so we concluded that the old battery probably had dead cells so the alternator was trying really hard to charge it. But to connect the new batteries properly (which we already placed in a new location) we had to rewire almost everything.

The electrical refit project has been started.

But first, here are some before pictures (be prepared for the horrors): 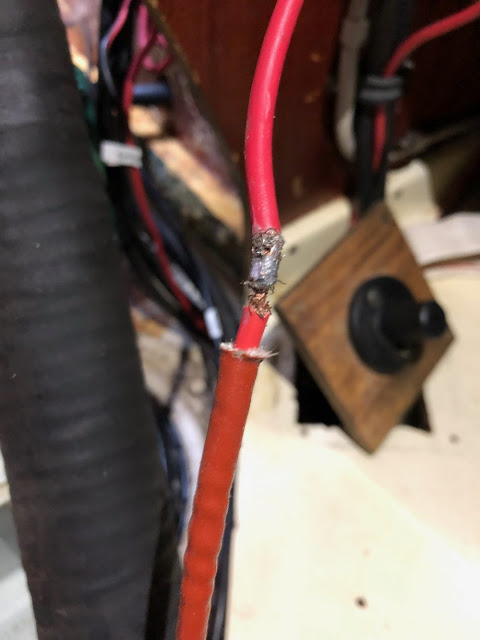 "Connection" on a positive wire. 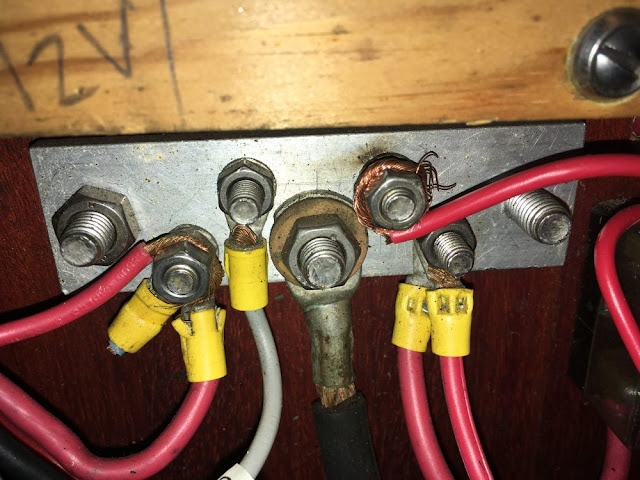 Old positive busbar with bare wire connections and broken terminals. Black cable without any indication that it's positive coming from the old battery. 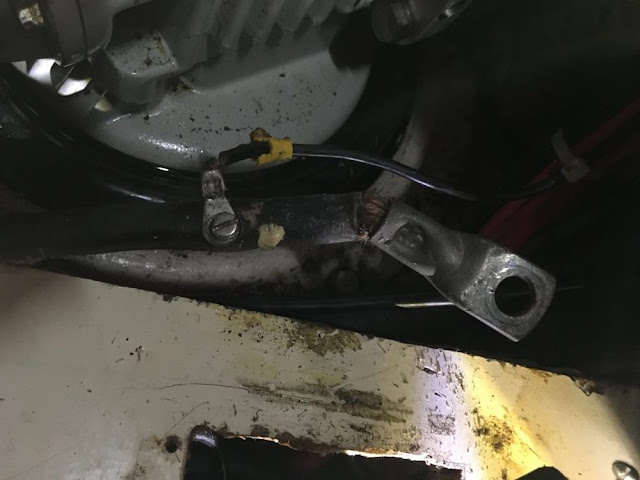 Ground wire with another negative wire screwed into it(!) 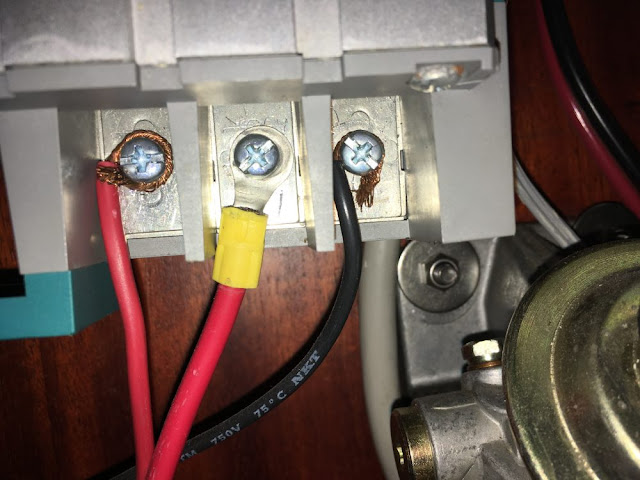 Connections on the battery charger (40A)

One interesting thing is that there was no negative busbar on the boat and all negative wires were lead to the main switch, which was breaking the negative side of the circuit. This resulted in such horrible solutions as screwing one wire into the other or using terminal strips for connecting multiple negative wires. So we decided to replace everything step-by-step and improve on the situation in every possible way.

Fortunately I already made a wiring diagram of the desired system, we just had to implement it. I marked the terminal screw and wire sizes on it too which helped a lot during the installation work. 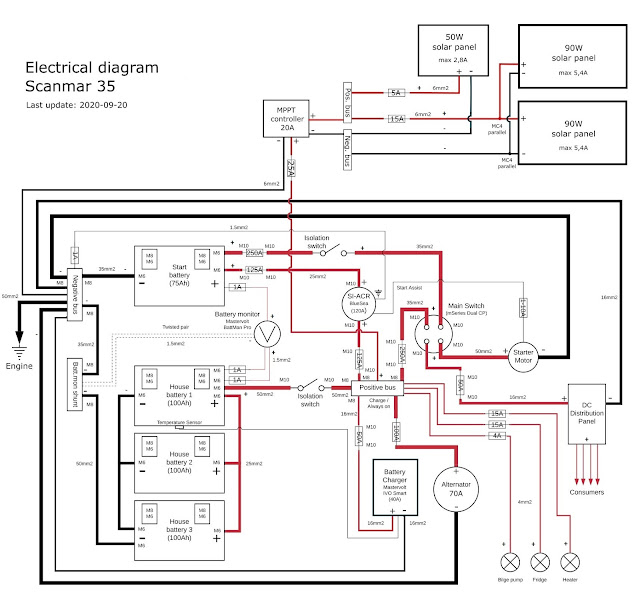 
I'm not a boat electrician and I have no previous experience in working on boat electrical systems. So I did some extensive self learning before touching anything. I've read through lots of forums and blog posts, studied several wiring diagrams done by others and watched almost all Pacific Yacht Systems' seminar videos, which were probably the most helpful. I strongly recommend them. Even if you're not planning a complete refit, you can always find areas where you can improve your system.
I tried to follow the manufacturer's recommendations on wire and fuse sizing and where available the official wiring diagrams, and used the BlueSea circuit wizard tool (mobile version) at all other places to minimize the voltage drop and have properly sized wires.

As we couldn't really estimate the length of all the cables in advance, and it's almost impossible not to make a mistake when ordering factory pressed cables, we decided to cut and press the cables on the boat with a cable press tool. We also educated ourselves on how to properly do pressed cables and tried to do our best to have a good, sealed and heat-shrinked connection on the terminals that will last. All the material we used is marine grade. We also took the opportunity to install the new BlueSea SI-ACR, main switch and the new Mastervolt BattMan Pro Battery monitor.

The first thing we added was a negative busbar, moved the switches over to the positive side and installed fuses on all critical locations. Another mistake the previous owners made (and we will have to fix), is that the positive busbar and all the positive wires are hanging above the engine which I don't feel comfortable with and they're in a hot area without any ventilation. We would like to move all of them to the other side of the bulkhead, but first we're planning to get a new alternator with a bit larger capacity and get rid of the old TWC external regulator, which will hopefully free up enough space on the other side of the bulkhead.

In three days we reached a state where we could start the boat again and use most of the essential systems, but those three days were really tough, we were working on it 10 hrs a day. There're still lots of things to do, but we're slowly getting there and there is always room to improve it further. 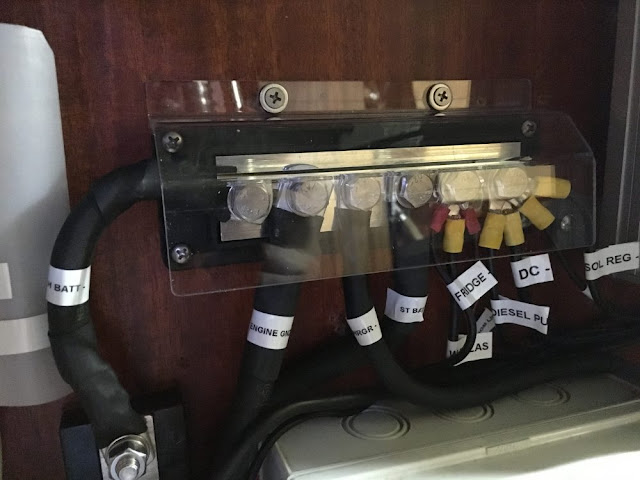 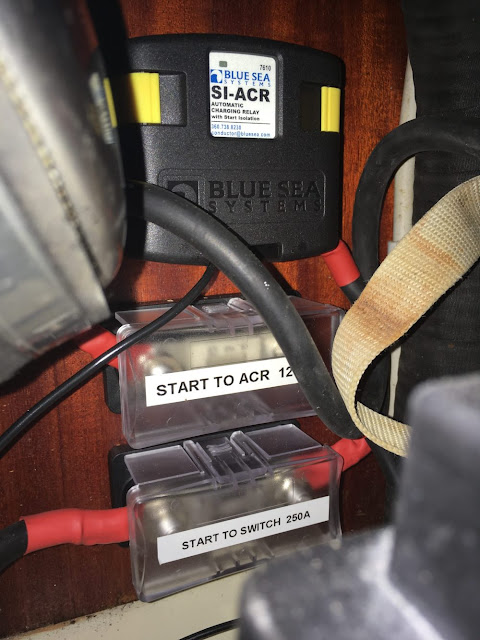 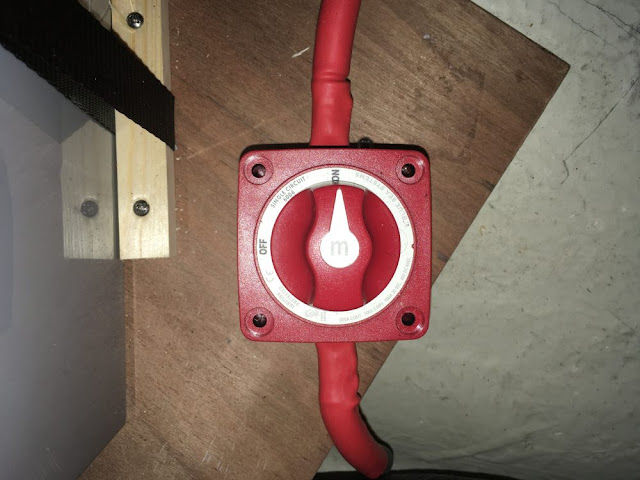 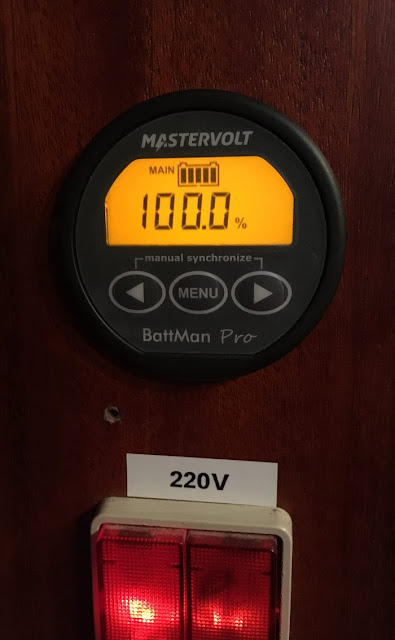 Battery monitor installed (visible from the main saloon and the galley)