May 07, 2019
Last weekend we installed the ball-valves and hose tails on the skin fittings and tried to arrange everything to it's final form. If I would have to do it again, I would try to get hold of Loctite 572 instead (not easy to find around here) as 577 cures too fast, you barely have enough time to play with the fitting and find the right position. We've put on plenty of sealant on the treads and used up almost all the 50ml for this job (6 seacocks). 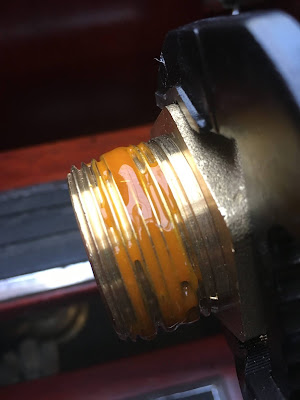 The most difficult part was to put together the toilet discharge assembly, due to the fast curing thread sealant, the limited space and that in the last minutes I started hesitating if this is the best arrangement. 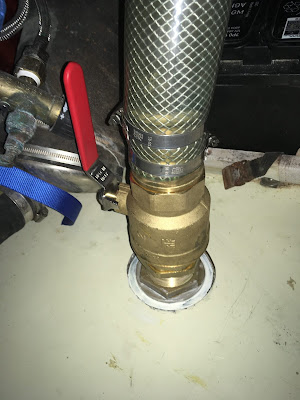 I considered connecting the discharge hose to the top of the tank instead and skip the whole T piece, leaving just a straight discharge hose from the Y-valve at the bottom of the tank to the thru-hull (with only one ball valve). With this setup, there would be no direct discharge to the sea from the toilet, only through the tank. 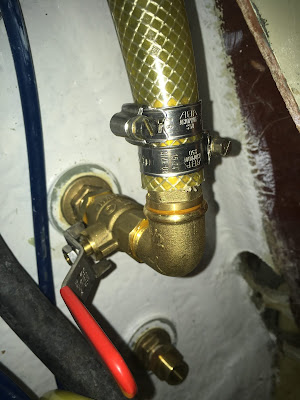 I still think that would have been the simpliest solution, but due to the placement of the holding tank and the very limited space in the cabinet, we would need to disassemble the whole cabinet in the toilet, drill a new hole towards the tank and even temporarily dismount the tank to have access to it's top, which would mean moving or removing the diesel tank first. So in the end we sticked to the original plan with the T piece and the two ball-valves. 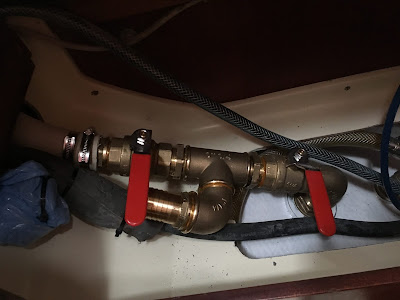 The previous owner had an extra (plastic) ball valve from the T piece towards the toilet, and I realized it might have been added to prevent the back-flow to the bowl. We won't have that, but we're going to add a check-valve and bring the discharge hose loop higher above the waterline.

The rest of the seacocks were quite straight forward, except the new transducers, where we made a terribly stupid mistake. You should always read and follow the manual carefully. We didn't and skipped the step that said "make sure to mount the fitting with pins at a 90 degree angle to the centerline of the boat". Which doesn't really matter for the depth sounder (at it shoots to all directions), but is perfectly common sense for the speed/log where the wheel will not spin otherwise. Sadly the Garmin manual doesn't emphasize the importance of it and there are no visual drawings either. So we messed it up and only realized after the sealant cured and we dry fitted the transducer.

We ended up cutting the new thru-hull out and re-doing the job. But at least we could experience how strong the Sikaflex 291/591 is. The sealant was flexible which allowed for some small movement, but was holding the thru-hull so strongly, I couldn't remove it without destroying the plastic. I ended up cutting it out with an oscillating multitool, then cleaned up the the remnants of the sealant and prepared the surface again. 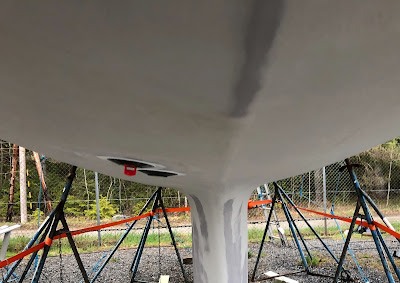 Fortunately I found a spare Silva/Nexus/Garmin skin fitting at the local chandlery (the last piece in stock) and installed it right away.