Our engine was producing some white smoke which can be due to water getting burned with the fuel. We thought it was time to check how the diesel tank looks inside and possibly change the fuel to see if it solves the issue.

The tank has no inspection hatch, so it had to be done through the fuel gauge opening. Once opened, I could clearly see that the tank needs to be cleaned and the fuel is full of water. There were growth flowing in the fuel too which could clog the filters any time. Unfortunately the fuel gauge opening is very small, so my hand won't fit in, I had to find some other way. 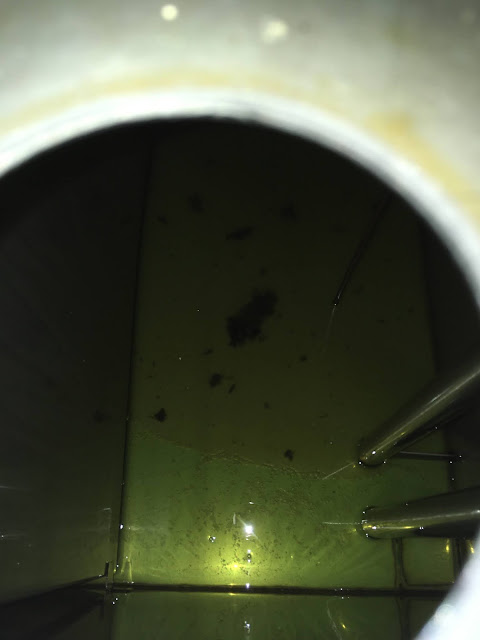 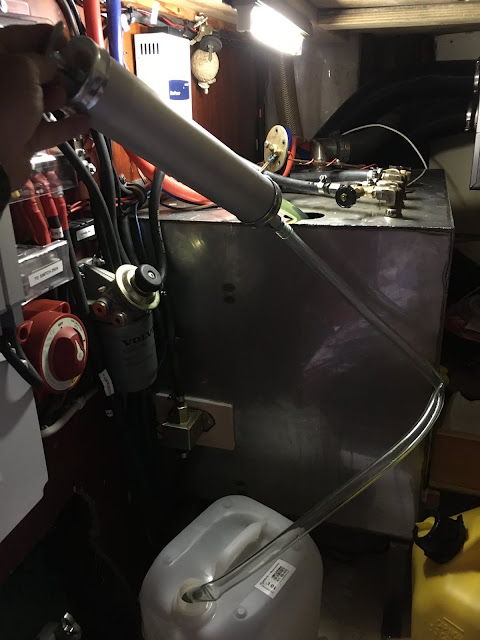 The first thing we did was to pump out all the old diesel, for which we used a manual fuel pump. The tank on Ann-Riis is rather big (~160 liters) and it had around 90 liters still in it. It took a while to pump it all out and carry in jerry-cans to the recycling station.

Then I picked up a flexible "grabber" which can be used to grab stuff from difficult places and used it with tons of paper towels to clean the tank. 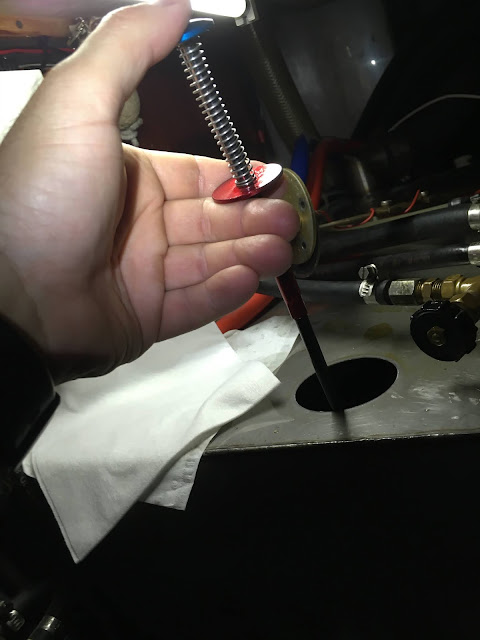 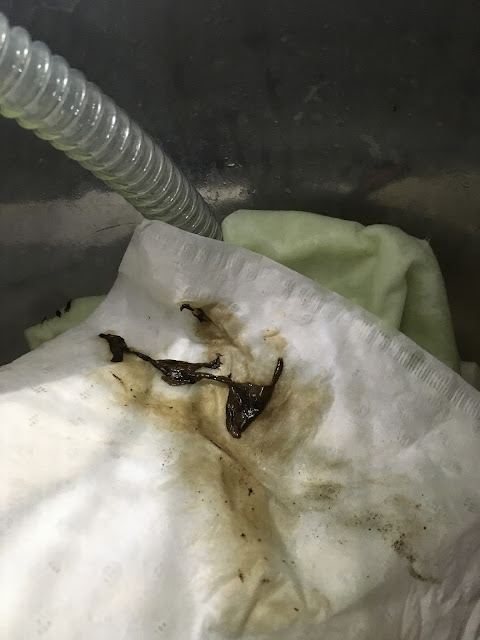 We changed both fuel filters and filled the tank with fresh fuel. While at it, we also replaced all fuel hoses (6 meters of 8mm Lloyds approved marine grade hose) from the tank to the engine as the old ones were showing signs of wear.

The extensive white smoke issue is now gone and the engine runs much better. 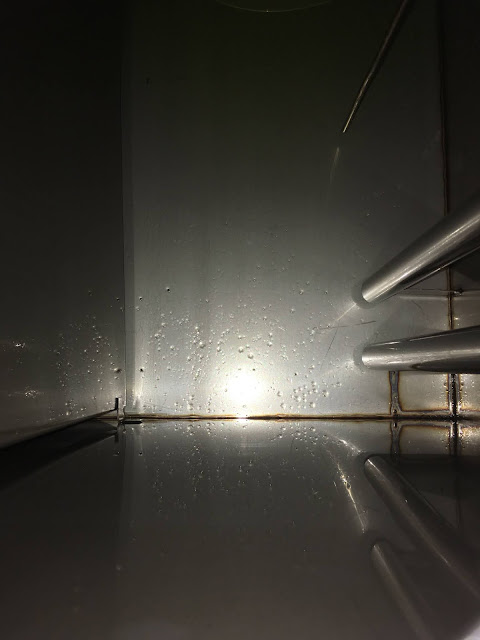 July 06, 2020
Read Part 1 After careful surface preparation the bilge reinforcement project continued with laying the new laminate. I consulted with West System on what fabric to use and they suggested biaxial cloth without chopped strand matting. The biaxial cloth is very strong and CSM would just add weight. We bought 600g biaxial cloth with 45/45 degree strands from Composite24 and West System 105 epoxy with 206 fast hardener at a local marine store. Cutting fabric The work was done in sections, we started with the bilge bottom/floor while the keel nuts and washers were removed. It got 4 layers that come up 10cm at the bilge sides. This area gets most of the loads and we wanted to reinforce it by connecting the fabric on the bottom to the one to be layed on the sides. 4 layers on the bottom In theory these types of reinforcements are suggested to be done either with the keel dropped or while the keel is hanging so it's not compressing the joint while the boat is stan
2 comments
Read more

February 18, 2020
Ann-Riis had delamination at the floor beam to hull attachments probably due to earlier groundings and we could also see the swinging/pendulum keel symptom when the boat was transported with the keel hanging. It was time to do something about it. The plan is to reinforce the whole keel-to-hull joint with 3-4 layers of 600g biaxial fiberglass cloth, re-bond the floor beams to the hull with at least 6 layers and add new structural members to stiffen up the construction against side loads. Delamination: In the fall of 2019 we started the keel/bilge reinforcement project. It took several weekends to sand everything and it was probably the most difficult boat work (or any type of work really 😃) I ever did. I covered the working area with plastic protective foil, but it didn't do much. The fiberglass dust was so intense that after a while the tape holding the foil was falling off and the dust covered every corner of the boat. I killed one orbital sander and one vacuum cl
2 comments
Read more

September 11, 2019
The electrical system on the boat was in a very sad condition and needed a refit. As it's often the case on older boats, the previous owners just added new stuff without really improving the system or thinking it through. Worst of all, they didn't used marine grade materials or did the installation right either. They just applied quick fixes and left it that way. We were planning to rewire the boat completely during this fall, but as it turned out, it couldn't wait. When I started the engine before heading out for a one week sail, the battery warning light came up. According to the manual the light might indicate incorrect voltage from the generator. When I checked it with a multi-meter, it was very high indeed, well over 15V, so it was overcharging the batteries, which carries the risk of gas leakage or explosion. So we decided to investigate it further and delay our departure for vacation. After disconnecting the house bank, the alternator output normalized, so we conc
2 comments
Read more