The electrical refit continues with the DC panel. We're installing a new panel (Pros by Ditel) with hydraulic magnetic breakers from Carlingtech. I tried to select appropriately sized breakers for the separate circuits and where necessary (or practical), combine several functions on one switch, like the NMEA instruments and navigation. In these cases the combined circuits will be fused separately in a fuse box behind the panel and the breaker on the panel is used just as a switch.

We selected the Pros Modular panel because it was the only one we could find that was a fit for the cabinet door frame on the boat. There aren't many nice horizontal panels on the market unfortunately.

The 10 switch horizontal panel (PROSXRC10) and the sailboat light indicator panel (PROSLCL1) fits perfectly in our door frame side by side. 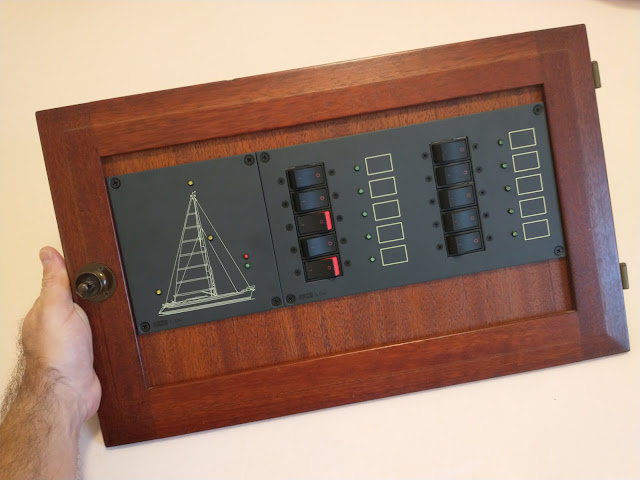 The plywood insert had to be removed from the frame to replace it with a new one, which was not easy. I considered just gluing on one more layer of a thin mahagony plywood first, but then decided to hammer out the existing insert, hoping that the glue of the frame will release. Unfortunately it didn't and the frame broke, but luckily in a "nice way" if I can say so. So that the old insert could be replaced easily and the frame re-glued without it being too obvious. 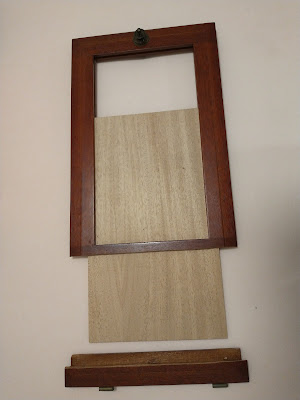 I used a 6mm mahagony veneered plywood, which I treated with oil, then painted with a darker mahagony paint (Cuprinol Ädellasyr) to get a quite close match to the original color. 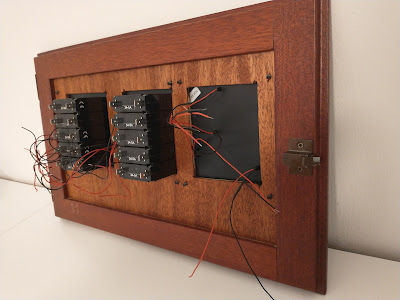 I purposely positioned the new panel closer to the top so I can fit USB charger and Cigar outlets and any additional stuff later below it.

Here is how it looked before with the 35 year old Delab Marine breaker panel: 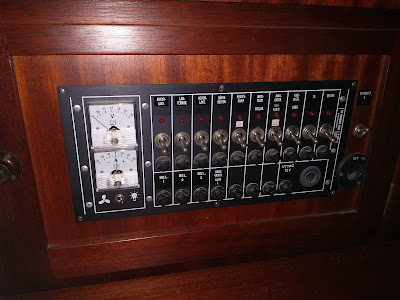 The cigar outlet was next to the panel and cut down at the edges as it didn't fit. The Voltage and Amper meters were disfunctional, as we re-wired the whole system and added a new MasterVolt Battery monitor. The Delab's "sensor" module was removed and I didn't really wanted to put it back: 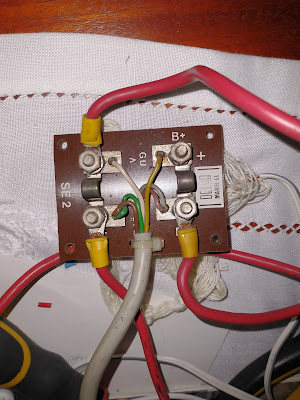