All of the old self-polishing bottom paint has been removed. We scraped it off with a ProScraper, then sanded it with a 120gr orbital sander to get rid of any residues. The hull has been epoxy treated before and the old barrier coat was still intact in most places. We decided to apply a new barrier coat on top of it anyways, as this is the perfect opportunity and we don't want to redo this job in the near future. 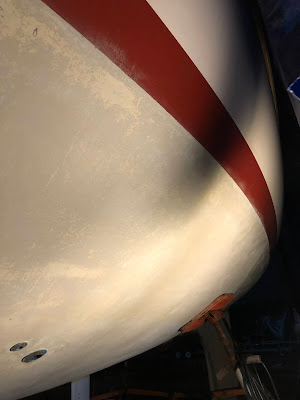 We choose Lefant's Epoxy primer which is a quite thick epoxy barrier coat that can be painted down till +5 celsius degrees and makes a watertight seal after even 4 layers. As we already had a barrier coat we decided to go with 4 layers and iterate between white and black colors to make it easy to get a good coverage. We used 12 liters of primer in total (one 3 liter can was just enough for one layer).

The keel was also sanded back to the previous epoxy primer and was treated with a rust protecting primer before going over it with the new epoxy primer.

On scratches we used Lefant's Epoxy Filler.
For the bottom paint we selected Trilux Hard Eco, which is a biocid free 2-component hard epoxy bottom paint. It's allowed in all waters in Sweden (lakes too) and creates a hard scrapable surface. According to International's calculator for painting a 8.5m (waterline) x 3.3 (beam) x 1.8m (draft) fin keeled boat surface in two layers requires 4 liters of paint. We bought two 2.5 liter cans which in the end was almost enough for 3 layers.
The plan is to clean it regularly with a Scrubbis brush and use a boat washer more than once during the season. We're excited to see how it will work out. If it won't, it shouldn't be a problem to paint any other antifouling paint on top of it next year. 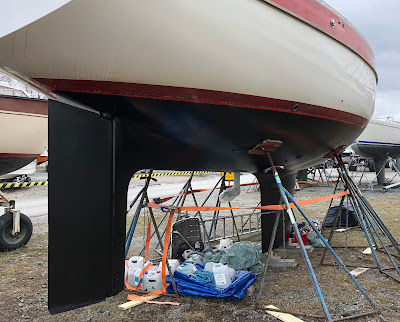